I haven’t touched my custom Linux board project in a while ( https://protoni.fi/osd3358-linux/ ) so I thought that it was about time to start actually doing something with it.

I ordered a bunch of these prototyping/development boards from MikroElektronika ( https://www.mikroe.com/ ) called “Click boards” and started messing around with them.

A lot of configuring and figuring out was required so here are some notes on that.

Not a Click board, but the first issue I had was that I couldn’t really move files over to the Linux system and command line editors didn’t work all that well over UART.

I only had access to the board through USB client or UART pin as a COM port using Putty so I bought this ~9€ USB -> Ethernet adapter to solve this issue. It just works out of the box. Just needed to plug it in, figure out the IP address of the Linux board and SSH in to it.

The RJ45 adapter is also great because the beaglebone Linux has a package management system so I can just install whatever I need using apt-get now that I have internet connection working.

There is no ifconfig on beaglebone linux, apparently it only has a ip a command. ( IP highlighted in yellow )

SSH in to the device

I have a router where my computer and the Linux board is connected so I didn’t have to set any IP settings on the host machine. But here are some notes on that as well.

Configure the IP and connect

The LTE modem Click board that I have is this one:

It has an Cinterion ELS61 modem chip in it. Docs:

I had a lot of issues with getting a mobile interface on linux setup with the modem and in the end I didn’t get it to work through the UART pins that are in the Click board headers. It probably requires some drivers to actually work.

Instead I connected a micro USB cable from the Linux board’s USB host port to the Click board’s USB client port.

Setting up the mobile interface

I spent quite a while hopelessly searching the net to solve the issues that I had with the modem internet connection setup. The modem itself worked right away. I got a pre-paid SIM card from the nearest kiosk just before it closed at 10pm so I got to test the modem right away. I tested the modem by calling from it to my own cell phone.

The first port on Linux board that I tested was /dev/ttyACM0. The minicom connection seemed to open and all of the AT commands seemed to work except AT^SWWAN that is supposed to open the internet connection. 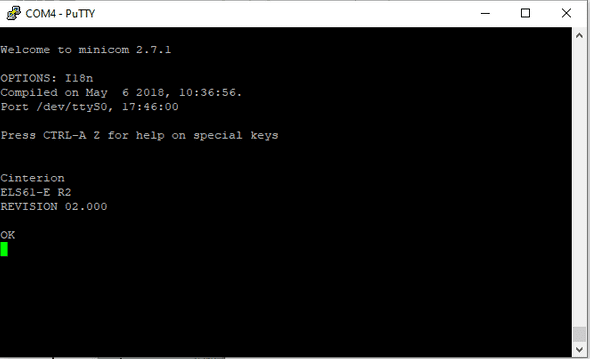 By default, it just gave an error called “Error”, but after digging around I was able to set an extended error mode on, which can be set on with this command:

Errors can be queried with this:

After setting the extended settings mode I was getting 2 types of errors:

And the other one was:

Never solved those issues, I just happened to test the /dev/ttyACM1 after battling with this for a while and it worked!

The internet parameter is the APN of the operator.

Before I decided to test the USB, I spent hours on trying to make the UART route work. I found only 2 other people on some forums who seemed to have a similar error. Last posts to those threads were from years ago and no responses after that.. frustrating. I guess they gave up too.

These were some of the errors I got:

After I had spent the whole night trying to solve these errors I happened to get it to work with the /dev/ttyACM1 way explained earlier.

The temperature Click board that I got is this one:

It has an STTS22H temperature sensor IC in it.

The first problem was that the Beaglebone Linux that I’m running on the board currently didn’t have I2C1 bus, that I have routed to the Click board headers. It had to be configured in the device tree and that was an whole nother journey. I’ll probably do a separate post for the device tree tuning.

After getting the I2C1 bus working, it was possible to get access to the temperature sensor.

Here we can see that the temperature sensor 0x3f is detected. ”—” means that no devices were found. “UU” can also be found sometimes, it means that it is an reserved address.

I found a python program for some other I2C temperature sensor online, so I modified it to be able to read the temperature from the STTS22H as well.

The Click board that I got for GPS location reading is this one:

It contains a Quectel L70 GPS chip and it can be communicated with trough UART.

Output GPS data to see that the chip works

At this point some data should already be seen in the terminal if the device works and correct tty port is used.

I keep getting these errors still

A hacky fix to make it actually work. Fix later.

I don’t have a GPS antenna, so gps can’t see any satellites ( Quality and Sats field ) 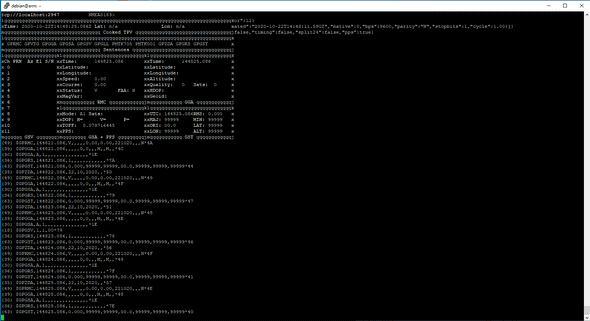 Not a Click board, but I remembered that I bought this wifi module some years ago and decided to test it as well:

It has an ESP-12E module containing a ESP8266 chip which includes a Tensilica Xtensa 32-bit LX106 RISC microprocessor. NodeMCU has 128 KB RAM and 4MB of Flash memory.

I found this “slip router” project from github which allows me to setup a Linux interface to communicate with the Wifi chip.

I went on and started setting up the ESP SDK so that I could build the slip router. Later on I realized that the github repo has the pre built binaries already. But now that I have the SDK setup, I can for example change the UART baud rate and so on.

Build the slip router and flash the firmware

Setting up the wifi interface

The “slip” interface on Linux

Testing SSH with termux on Android, it works !

I enabled wifi on my phone, the ESP8266 access point showed up and I was able to connect to it.

Not sure if this is even supposed to be possible, but here’s the command I tried

It failed. And I’m not sure if it’s just an coincidence or did it break something, but now when I try to for example update the board with apt-get, it gives me this error 😳

Quick google search suggested that it is caused by some python serial module mismatch and to resolve, I should install:

This is where I noticed the lzma_read error above. Need to investigate more.

Couldn’t get the accelerometer working yet. I’ll update this post if and when I can see some progress with this.

I was able to build this driver for the chip:

The driver is able to at least read some I2C registers before failing to this configuration loading check with this error:

If solving this begings to take too long, I’ll probably test the driver with SPI bus. For that I need to modify the device tree again and add the SPI to it.

The AM335x processor already has 2 CAN buses, but they are not currently routed to anywhere on the board.

This is the CAN board: